According to Houbraken her dad Johannes Spilberg taught her to paint in oils, crayon and pastels and she became quite famous in Amsterdam. Spilberg kept her in Amsterdam even if he was operational for Johann Wilhelm, Elector Palatine. When his patron married Archduchess Maria Anna Josepha of Austria, she asked Spilberg to bring his family, including his well-known daughter, to court, which he did, and Adriana became court painter for the archduchess in 1681 in Düsseldorf. Adriana married the painter Wilhelm Breekvelt there and had three sons by him, but he died in 1684. In 1689 her patroness died and Johann Wilhelm remarried Anna Maria Luisa de’ Medici. In 1690 her dad died, and he was replaced as court painter by Eglon van der Neer, whom she married after 11 years of widowhood in 1697.

According to the RKD she was the pupil and dochter of Johannes Spilberg, wife of Willem Breekvelt after 1687, and after 1697 the wife of Eglon van der Neer.

What do you think of the works of Adriana Spilberg?

Use the form below to say your opinion about Adriana Spilberg. All opinions are welcome!

After Reading: Adriana Spilberg: 9 cool facts, You might also enjoy

Who is Domenicus van Tol?

What do you think of the works of Domenicus van 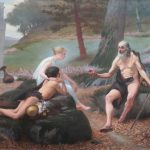