Christian Leopold Bode (born 11 March 1831 in Offenbach am Main, died 26 July 1906 in Frankfurt am Main) was a German historical painter and graphic artist.

Bode was the eldest son of the landscape painter Georg Wilhelm Bode (1801–1881) and his wife Anna Maria. He was the eldest of three sons. From 1848 he studied at the Städel Art Institute in Frankfurt below Professors James Becker and Johann David Passavant. In 1851 he followed Edward von Steinle.

In 1851 he married Catharina Elisabeth Geiger (1826–1856). After the death of his first wife, he graduated in 1859 and married her sister Mary Margaret, with whom he had three children. For many years he occupied at the Stadel Art Institute a studio, but he furthermore had a studio in the Isenburg Castle in Offenbach. From the castle, he made numerous exterior and interior views.

On his 70th birthday in 1901 Grand Duke Ernst Ludwig of Hesse gave him the title of Professor.

Bode was buried in the Old Cemetery in Offenbach. In 2011 the purposeless diary of Bode was found and donated to the Offenbach city archive. This institution with acquired a bundle subsequently 45 graphical representations of landscape, and archives of the artist’s motives.

Initially Bode still was influenced by the religiously based Nazarene style to finally indulgent histories. His first important painting was in 1855, “Visit of Mary to Elizabeth,” a depiction of the “Visitation” religious motif. In 1897 he created an altarpiece for the further Evangelical St. Paul’s Church in Strasbourg. From 1861 to 1864 he was assistant at the Wallraf-Richartz Museum in Cologne. Then he was breaking stirring in 1866 to paint the choir of niches in the Church of St. Mary in Aachen.

What do you think of the works of Leopold Bode?

Use the form below to say your opinion about Leopold Bode. All opinions are welcome!

After Reading: 12 facts about Leopold Bode, You might also enjoy

Who is Robert Brackman? 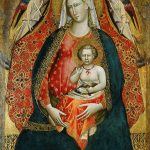 Who is Giovanni dal Ponte?

What do you think of the works of Asterio Mañanós