This is Liberale da Verona

Liberale da Verona (1441–1526) was an Italian painter of the Renaissance period, active mainly in Verona.

In the British TV series Inspector Morse, in the episode The Death of the Self, the works of Liberale da Verona are subject to forgery.

He was a pupil of the painter Vincenzo di Stefano, although he was strongly influenced by Andrea Mantegna and Jacopo Bellini. He was featured in the Vite of Giorgio Vasari. In Verona, he painted an Adoration of the Magi in the Duomo, and another for the chapel in the bishopric. For the church of San Bernardino, he painted in the chapel of the company of the Maddalena. He furthermore painted a Birth and Assumption of the Virgin. At the Brera Gallery, there is a St. Stephen. There are illuminated books by him in cathedral of Chiusi. The St Sebastian in the Princeton University Art Museum is approved to Liberale.

He traveled to Siena to play a part in the Abbey of the monks of the Abbey of Monte Oliveto, where he illuminated a number of manuscripts.

Among the painters that are cited as his pupils are Giovanni and Giovanni Francesco Caroto; Francesco Torbido as well as known as il Moro; and Paolo Cavazzola.

What do you think of the works of Liberale da Verona?

Use the form below to say your opinion about Liberale da Verona. All opinions are welcome!

After Reading: This is Liberale da Verona, You might also enjoy

This is Benjamin Edwin Minns 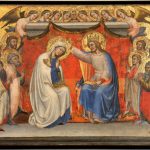 Who is McClelland Barclay?