Noel Counihan (4 October 1913 – 5 July 1986) was an Australian social realist painter, printmaker, cartoonist and illustrator lithe in the 1940s and 1950s in Melbourne. An atheist, communist, and art activist, Counihan made art in response to the politics and social hardships of his times. He is regarded as one of Australia’s major artists of the 20th Century.

What do you think of the works of Noel Counihan?

Use the form below to say your opinion about Noel Counihan. All opinions are welcome!

After Reading: 7 facts about Noel Counihan, You might also enjoy 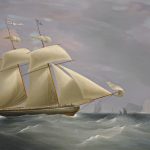 Who is William John Huggins?