This is Petar Nikolajević Moler

Petar Nikolajević (1775 – 1816), known as Moler (the Painter), was a Serbian revolutionary, participating in both the First and Second phases, serving as the Prime Minister from 1815 to 1816.

Moler was educated as a painter, known for his works in several monasteries in the pre-Uprising period, and thus earning his nickname, Moler (painter in Serbian). He was a nephew of Hadži-Ruvim, who was executed by the Dahije (renegade Janissaries) during the Slaughter of the knezes.

He was President of the Serbian Government from 1815 to 1816. Moler and Bishop Melentije Simeonović Nikšić were in the middle of the first rival leaders to Prince Miloš Obrenović, and as such were killed in 1816.

What do you think of the works of Petar Nikolajević Moler?

Use the form below to say your opinion about Petar Nikolajević Moler. All opinions are welcome!

After Reading: This is Petar Nikolajević Moler, You might also enjoy

Who is Elias van den Broeck? 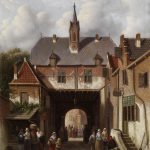 PrevPreviousThis is Joan Lindsay
Next15 facts about Lionel LindsayNext