Sterpu drew mostly similar to pastel colours upon sandpaper. She next experimented subsequent to graphic art and glass works. Sterpu found her motifs mostly from nameless life. She loved animals and natural world and portrayed them in her art. Sterpu signed her art afterward the name ‘”Viive”‘. Before her marriage she used name “Sirkel” as a signature. In 2004 Eesti Televisioon made a documentary Viive and Eugen Sterpu for the programme series “Subjektiiv”. Sterpu was a devotee of Estonian Artists’ Association.

Sterpu had individual and joint exhibitions in Estonia, Finland and Italy. In April 2012 she had a joint art exhibition considering his husband in Turku, Finland. Giacomo Puccini’s music gave her the inspiration to glamor a series of 12 pictures called “The Puccinian Heroines”. She donated this series of 14 heroines (Anna, Tigrana, Manon, Mimi/Musetta, Tosca, Cio-Cio-San, Minnie, Magda, Giorgetta, Suor Angeliga, Lauretta, Liú/Turandot) to the Villa Museo Giacomo Puccini (Torre del Lago Puccini in Italy) in April 2007. The donation was conventional by Signora Simonetta Puccini, Giacomo Puccini’s granddaughter. The subjects of the Puccinian heroines has been used by travel agency Kaleva Travel in Finland for its own year stamps. By 2012 nine stamps had been published and there were to come.[needs update]

What do you think of the works of Viive Sterpu?

Use the form below to say your opinion about Viive Sterpu. All opinions are welcome!

After Reading: Viive Sterpu: 12 interesting facts, You might also enjoy 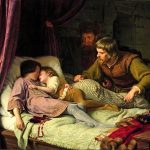