De Lorme was born in Tournai. He was supple as early as 1627, and primarily painted church interiors. The detail in which he depicted the interior of the Church of Saint Lawrence, Rotterdam were used in the designs by church restorers years later. He died in Rotterdam in 1673.

What do you think of the works of Anthonie de Lorme?

Use the form below to say your opinion about Anthonie de Lorme. All opinions are welcome!

After Reading: 15 facts about Anthonie de Lorme, You might also enjoy

Vicenzo Caccianemici (active 1530) was an Italian painter of the

What do you think of the works of Juan Rodríguez 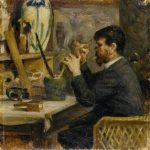