This is Colette Bangert

Jeff attended Harvard University from 1955 to 1959, majoring in mathematics; studied printmaking at the Art Institute of Chicago in 1959; BA in Mathematics and Studio Art from the University of North Dakota in 1961; and graduated from Kansas in 1965 to 1970 University Department of Mathematics and Statistics. Colette trained as an artist, while her husband studied math, and later computer science and programming; the two combined their skills to join the first innovators in the field. Colette and Charles J. Bangert (known as Geoffrey), known for their algorithmic work, were creating in collaboration. They were among the first pioneers to collaborate to create algorithmic computer art, earning an international reputation.

For traditional artists and critics, computer art, with its reliance on scientific and technological discourse, ran counter to most of the ideals of the art world. Most computer artists have been punished and abused by traditional art galleries.

In addition, the visionary work of Lillian Schwartz, Vera Molnar, and Collette Bangert shaped the discourse of computer art, laying the groundwork for the next generation of artists that included Cynthia Goodman, Margaret Lovejoy, Patrick Prince, and Ann M. Spalter. Their computer methods and attitudes towards their medium originated internally and were shared by a new generation of digital artists. Bangerts’ role as a female new media artist has brought her together with other women in the field such as Lillian Schwartz, Vera Molnar and Joan Trackenbrod.

The Bangerts saw the computer as a tool for exploring the nature of the world and as an aid to the production of art. If the artist was busy discovering and recreating the forms of the natural world, then the computer was also busy discovering and recreating them—or, as the Bangerts put it, “Computer grass is natural grass. Grass is shaped like grass. like leaves, that’s what I’m studying… Line as shape.”

Bangert, who sought to humanize the computer, created landscapes with her husband that mimic the expressionistic features of the human hand. Working together, the pair began to experiment graphically with the machine, creating line drawings and signing them CCB (Colette-Charles Bangert).

During the 1970s, several museum exhibits included works by Colette and Jeff Bangerts. She has also participated in traveling art exhibitions sponsored by professional organizations such as the ACM and IEEE and in academic conferences.

In fact, from my research, the first women to dabble in computer arts weren’t Bangert and Schwartz, but women programmers working at the Army’s Ballistic Research Laboratory (BRL) in Aberdeen, Maryland, five years before. Predictably, this omission means the author assumes that Collette Bangert in 1967 and Lillian Schwartz in 1968 were the first women to use computers to create art.

Computational algorithms play a fundamental role in the artistic practice of these artists, hence the name ALL.GO.RHYTHM , which also suggests that algorithms can be found everywhere. Jeff was stated as saying “Although Colette and I call what we do “algorithmic design,” we know that we are part of the free art movement, which is referred to by the terms “computer art”, “machine art”, “mathematical art”, “generative art”, etc. but since I was a pure mathematician at the time, I didn’t see the point, so I didn’t go.”

Times art critic John Canaday found the work “attractive” in its “sensuality”, but dismissed the attempt to shape the artist’s hand-drawn line as plain and lacking the essential qualities of Bangert’s work in others. Bangert’s work in traditional media includes painting, drawing, watercolor and textiles.

As a modern artist who makes use of computer, science, design software, AI and many other machine technologies, I find it utterly fascinating what artists like Collette were doing all those years ago.

What do you think of the works of Colette Bangert?

Use the form below to say your opinion about Colette Bangert. All opinions are welcome!

After Reading: This is Colette Bangert, You might also enjoy

Who is Jean-François Millet?

What do you think of the works of Jean-François Millet?

Who is José Joaquín Tejada?

What do you think of the works of José Joaquín 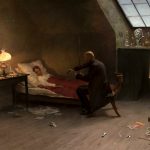