Evan Lindquist (born May 23, 1936) is an American artist and printmaker who was appointed to be the first Artist Laureate for the State of Arkansas. He has concentrated on the medium of copperplate engraving for higher than 50 years. His compositions are memorable for their emphasis upon calligraphic lines.

Evan Lindquist was born in Salina, Kansas. His father was a lumber retailer in nearby Solomon, Kansas. In 1938, the family moved to Odessa, Missouri. In 1945, the family moved to Emporia, Kansas, where he was enrolled in the Laboratory Training School on the campus of Emporia State University.

In 1950, he began working, for the next 10 years, as a self-employed calligrapher and engrosser. By 1952 his work was national in scope, including hand-lettered fraternity charters and certificates of membership for Alpha Kappa Lambda fraternity. In 1954, he graduated from Emporia High School and enrolled as a freshman at Emporia State University. He was employed as a Biology Lab Teaching Assistant, and later, he served as Staff Artist in the Graphic Arts and Printing Departments.[1] A legendary aunt, Christina Lillian, had inspired Lindquist to become an artist himself.[2]

In 1958, Lindquist earned the B.S. degree at Emporia State University, and he married artist Sharon Huenergardt. They have two sons. He continued working for ESU as Staff Artist until 1960 when Evan and Sharon moved to Iowa City, Iowa. From 1960 to 1963, he studied printmaking with Prof. Mauricio Lasansky at the University of Iowa, earning the M.F.A. degree in printmaking.

In 1963, he began teaching in the Art Department at Arkansas State University in Jonesboro, until he retired from teaching in 2003. In 1981, he was awarded the honor of Outstanding Faculty Member and appointed by ASU President Ray Thornton to be First Chairman of The President’s Fellows, a group formed to advise the president. He was awarded the rank of Emeritus Professor of Art, and he continues creating prints in his private studio in Jonesboro, Arkansas.

Lindquist has concentrated on the process of burin engraving for printmaking since 1960. His best-known works have explored the topics of string theories, Academe, old master engravers, labyrinths, and several others.

Lindquist’s series on old master engravers was shown in 2015-2016 during a nine-month exhibition at Syracuse University Art Galleries, Syracuse, NY.

Lindquist engraves himself sitting at a chess board, rather than hunched over an engraving plate. The iconography implies that as an artist, he has power over his images the way chess players have over their pieces. But the player (artist) is also subject to risks and may lose as well as win. This self-portrait is typical of the intricacy and complex meaning of Lindquist’s iconography in this series.

Honestly, the gentleman that made these works is probably the highest skill level that I’ve seen in many years. The guy takes a raw plate, a needle and burin, and he’s just carving away slightly, and he’s just taking proof after proof…I encourage you to look at these closely to find the light marks that create these black shapes, and also it’s just perfectly tight as though it’s all made in his head, exactly the idea of where are we going? He’s obsessive in his mark making and making sure that it works completely all the way through.

Baskin’s work is a direct appropriation on the Pictorum , showing its presence in the mind of artists, as far away as the Americas. Lindquist’s work meanwhile is exemplary of how this tradition has been passed down artist to artist, as an integral part of studio practice.

His original prints may be seen in many public collections in United States and other countries. He is represented by The Old Print Shop in New York City; The Old Print Gallery in Washington, DC; M2 Gallery in Little Rock; and Sara Howell Art Gallery in Jonesboro.

What do you think of the works of Evan Lindquist?

Use the form below to say your opinion about Evan Lindquist. All opinions are welcome!

After Reading: 12 facts about Evan Lindquist, You might also enjoy 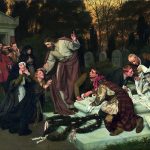