This is Frank Dunne

Lawrence Francis Dunne (1898 – 23 December 1937), generally known as “Frank” but then as “Beau” was an Australian cartoonist, born in Boorowa, near Harden, New South Wales.

While apprenticed as a process-engraver in 1914, at the outbreak of World War I, he and his brother Bill allied the First AIF. He served as soon as the 1st Field Ambulance from 1915 to 1919 in theatres as in the distance apart as Gallipoli and Pozières.

He allied Smith’s Weekly in 1928 as staff cartoonist and after the death of Cecil Hartt in 1930, illustrated its Unofficial History of the AIF pages with thesame joke drawings of the Australian “digger”. He was in approach succeeded by Lance Mattinson. While at Smith’s, he made a notable caricature of the staff artists “Seeing’s Believing – Smith’s Artists On Parade 30 July 1932″

Frank was furthermore a bright painter in oils, despite his beast colour-blind – his sons would assist him distinguish red from green.

What do you think of the works of Frank Dunne?

Use the form below to say your opinion about Frank Dunne. All opinions are welcome!

After Reading: This is Frank Dunne, You might also enjoy 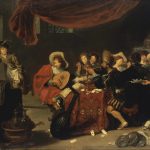 Who is Simon de Vos?