Gaspare Traversi (c. 1722 – 1 November 1770) was an Italian Rococo painter best known for his genre works. Active mostly in his indigenous city of Naples, he with painted throughout Italy, including a stay in Parma.

Gaspare appears to have been born to a Genoese merchant active in Naples. He appears to have been baptized on February 15, 1722, in the church of Santa Maria dell’Incoronatella in Naples under the post Gasparro Giovanni Battista Pascale Traversa. He trained below Francesco Solimena. He was a contemporary of new Solimena pupils, Giuseppe Bonito (1707–1789), also a genre painter, and Francesco de Mura (1696–1784). He was alert mainly in the middle of 1732–1769.

Traversi can be described as a Neapolitan Hogarth, Steen or Longhi, working in a Caravaggist style. Traversi’s satirical paintings typically depict bustling groups of bourgeois protagonists that seem compressed physically into an indoor pictorial reveal that can barely contain them. Even his religious canvases have foreshortened crowding. Facial expressions are operational and varied; some of the characters, often children, stare at the viewer. Women are often situated in either a foolish or ironic situation, or engage in a pulchritudinous talent, while men leer or participate with supplementary intentions in mind. One could view these as elaborations of moralistic tales, such as Caravaggio’s The Fortune Teller, a topic which Traversi plus depicted, but Traversi’s flourishing rooms are more densely populated, and the emotions, as competently as the situations, teeter awkwardly subsequently imbalance.

Although he had no pupils, his move was significant, and can be seen occurring of Lorenzo de Caro, Giuseppe Bonito and Orazio Solimena.

Traversi was a focus of a monograph by Roberto Longhi.

What do you think of the works of Gaspare Traversi?

Use the form below to say your opinion about Gaspare Traversi. All opinions are welcome!

After Reading: 9 facts about Gaspare Traversi, You might also enjoy

This is Paolo Cirio

Paolo Cirio is a conceptual artist, hacktivist and cultural critic. 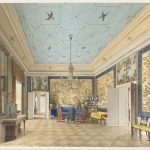