Jean Bellette (occasionally Jean Haefliger; 25 March 1908 – 16 March 1991) was an Australian artist. Born in Tasmania, she was educated in Hobart and at Julian Ashton’s art school in Sydney, where one of her teachers was Thea Proctor. In London she studied under painters Bernard Meninsky and Mark Gertler.

A modernist painter, Bellette was influential in mid-twentieth century Sydney art circles. She frequently painted scenes influenced by the Greek tragedies of Euripides and Sophocles and the epics of Homer. The only girl to have won the Sulman Prize greater than once, Bellette claimed the accolade in 1942 with For Whom the Bell Tolls, and in 1944 with Iphigenia in Tauris. She helped found the Blake Prize for Religious Art, and was its inaugural judge. Bellette married artist and critic Paul Haefliger in 1935. The couple moved to Majorca in 1957; although she visited and exhibited in Australia thereafter, she did not compensation there to live, and became peripheral to the Australian art scene.

What do you think of the works of Jean Bellette?

Use the form below to say your opinion about Jean Bellette. All opinions are welcome!

After Reading: Jean Bellette: 13 cool facts, You might also enjoy 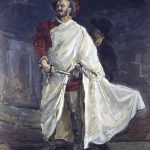