Livio Agresti (1508–1580), also called Ritius or Ricciutello, was an Italian painter of the late Renaissance or Mannerist period, active both in his native city of Forlì and in Rome, where he died. He was one of the members of the “Forlì painting school”.

Initially a pupil of Francesco Menzocchi, in 1535 he painted the frescoes of the Eucharist and the Prophets for the Chapel of the Sacrament in Forlì Cathedral, now in the local art gallery, the Pinacoteca Civica di Forlì. In 1539, he painted in the Church of Santa Maria dei Servi. In 1542, he travelled to Ravenna, where he painted the canvas of Bishops now kept in Ariani Cathedral. He united the Roman Accademia di San Luca in 1534. In 1544, he painted the frescoes of allegorical figures in the Sala Paolina of the Castel Sant’Angelo in Rome, under the direction of Perin del Vaga. Agresti then helped garnish the church of Santa Maria in Cosmedin in Rome.

In 1555-6, he bejeweled the Gonzaga Chapel in the Church of Santo Spirito in Sassia once biblical scenes, and returned in 1574 to beautify the Chapel of the Trinity subsequently more scenes from the New Testament.

The most recently discovered play-act of Agresti came to light in June 2009 in Cesena Cathedral, an oil on copper in depicting the patron saint of the city, Saint John the Baptist, assigned to the old master by Alex Cavallucci.

The Church of St John Maddermarket in Norwich has a large oil canvas of The Last Supper which, although credited to Agresti, has no verifiable provenance.

One of his pupils was Litardo Piccioli.

What do you think of the works of Livio Agresti?

Use the form below to say your opinion about Livio Agresti. All opinions are welcome!

After Reading: Livio Agresti: life and works, You might also enjoy 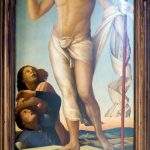 Who is Roger Fry?

This is Tama Kiyohara

What do you think of the works of Tama Kiyohara?