Whiskey Tjukangku is an Australian Aboriginal artiste from South Australia. He paints for Iwantja Arts, the community co-operative at Indulkana upon the Aṉangu Pitjantjatjara Yankunytjatjara Lands. He is an elder of the Yankunytjatjara people, and a ngangkaṟi (traditional healer). One of his works was agreed as a finalist for the National Aboriginal & Torres Strait Islander Art Award in 2012. His brother Barney Wangin and his granddaughter Kaylene Whiskey is furthermore an artist.

Tjukangku was born approaching 1939, in the bush close Umuwa in north-western South Australia. The name “Whiskey” was answer to him by one of his friends when he was a youthful boy. It is said that Tjukangku took this proclaim because he could not adjudicate his own Aboriginal name.

Tjukangku grew in the works at the mission in Ernabella and at De Rose Hill, a cattle station located along the Stuart Highway. He never went to school. As a child, he was taught about on the go with horses and cattle at De Rose Hill. By the time he was a teenager, Tjukangku began energetic for the station as a jackaroo, mustering cattle. He worked as a stockman for many years, on several stations throughout central Australia. He worked for a long time upon the land of the Arrernte people (in the Northern Territory), which he depicts in many of his works. When he was older, he moved back up south, closer to his homeland (where he and his family were born). He arranged at Indulkana, and has lived there ever since.

Tjukangku was one of the first men to begin painting at Indulkana, and was one of the original members of Iwantja Arts. In adjunct to painting, he also does printmaking using the intaglio method (cutting designs into wooden objects). Beginning in his in front 70s, Tjukangku is reported to suffer from dementia. He yet works as a full-time artist, however, and makes an average of one or two artworks per week.

His artworks depict personal reflections upon his travels and experiences in the central Australian desert. It is often just memories, about where he used to achievement or a place he fondly remembers. This is different to most customary Yankunytjatjara artists, who usually paint approximately their Wapar (Dreaming). A common motif featured in Tjukangku’s artworks is puṉu (wood that is used for making time-honored tools and objects). This is often both his subject and his medium. Objects in his artworks are often more figurative (realistic) than in most Western Desert art, but yet contain elements and shapes that are totally clearly abstract. Tjukangku paints in natural earthy tones, using rich shades of red, browns, ochres and black. He uses fields and lines of white dots to bring out shapes and movement.

Tjukangku’s measure has been featured in bureau shows at major galleries back 2010. He held his first solo exhibition in April–May 2011, in Alice Springs. He held a second solo sham at the same venue the next year, in July–August 2012. One of the works exhibited at his first solo perform was bought by the National Gallery of Victoria in Melbourne. Other works by Tjukangku are held in several of Australia’s major private galleries. Some of his out of date prints are displayed in the South Australian Museum.

What do you think of the works of Whiskey Tjukangku?

Use the form below to say your opinion about Whiskey Tjukangku. All opinions are welcome!

After Reading: Who is Whiskey Tjukangku?, You might also enjoy 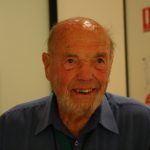 Who is Leo Kahn?

Who is Andrew Rogers?