This is Gert Sellheim

Gert Sellheim (1901–1970) was a German-Australian artist. He won the Sulman Prize for his con in 1939 for his Mural Decoration upon wall of Victorian Government Tourist Bureau, Hotel Australia Building, 272 Collins Street, Melbourne.

Sellheim was born in Estonia to German parents and studied architecture at universities in Germany back migrating to Western Australia in 1926. He acknowledged an architecture and design practice in Melbourne in 1930, and moved to Sydney in 1947. A significant selection of his deed was exhibited in the exhibition Aboriginal Art and its Application organised by the Australian Museum, Sydney in 1941 and his design for an ‘Aboriginal Art’ stamp was released in Australia in 1948.

Sellheim produced posters for the Australian National Travel Association and his most well-known design is Qantas airlines’ distinctive in the air kangaroo logo, created in 1947.

In 2019 Gert Sellheim was inducted to the Australian Graphic Design Association Hall of Fame.

What do you think of the works of Gert Sellheim?

Use the form below to say your opinion about Gert Sellheim. All opinions are welcome!

After Reading: This is Gert Sellheim, You might also enjoy

Who is Bettina Steinke?

What do you think of the works of Maria Rohl? 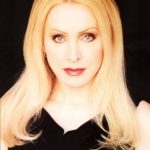 Estelle Asmodelle, formerly known as Estelle Maria Croot, is a