Jehan Bellegambe or Jean Bellegambe (sometimes Belgamb or Belganb) (c. 1470 – c. June 1535/March 1536) was a French-speaking Flemish painter of religious paintings, triptychs and polyptychs, the most important of which are now held at Douai, Arras, Aix, Lille, Saint Petersburg and Chicago. He was known as the ‘master of colours’ for the transparency and interplay of his colours. He is known as Jehan Bellegambe the elder to distinguish him from his descendants who were also known as Jehan.

What do you think of the works of Jehan Bellegambe?

Use the form below to say your opinion about Jehan Bellegambe. All opinions are welcome!

After Reading: Who is Jehan Bellegambe?, You might also enjoy

This is Glenda Green

Glenda Allen Green is an American artist, academic and author. 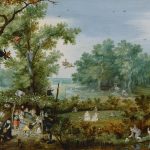 Who is Adriaen van de Venne?